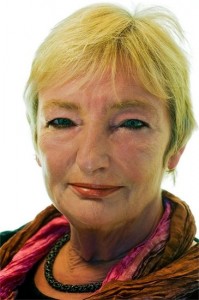 The story of a life

They were young, they were in love and they mourned the loss of a baby boy, who died only three days old. But this time all would be well. Even though the summer was long and very hot, Lilly was confined to her bed while her stomach grew yet again. And so a miracle on the first day of August a little girl was born.

Børge moved and proud took his little daughter in his arms, and both the happy, newly fledged parents wished all the very best for their child.

In that magic moment there was yet another miracle, as if a good fairy had waved her magic wand over the child, – or perhaps some other force, no one will ever know. But the child received a gift – as so the story is told. The gift was not beauty and riches but something far better, a lively and creative fantasy.

The little girl played and dreamt her way through childhood, was big sister twice and actively took part in her parents’ projects. Filming, at that time, the well- known books about Flemming and his adventures.

Her parents knew their eldest daughter loved writing stories and encouraged her to keep on. What they didn´t realize was that she daydreamed herself into these tales, she even scribbled them on to the toilet walls in the break times at school!

We jump a few chapters and return to the story where Marianne is grown-up and married to her beloved Karsten and has two lovely sons, Bjarke and Rune, with him.

The dream of becoming an author was still strong but she lacked courage. The writing desk draw was now so stuffed with poems and stories that it was falling apart.

It was then the little family went on their travels. Not an ordinary trip to sunny beaches but an adventure to far and mysterious lands in the Far East.

These countries foreign and mystical were also so much more. The people poor and exploited, lived simply and primitively in their villages, where many were ill and died too young, others had to flee and live in hiding in the jungle…

All these enormous impressions had to be recorded! They became a special kind of fairy tales which were read to Bjarke, Rune and many other children who loved the stories. Still, they went back into the stuffed drawer, were fished out occasionally, re-written and put back again!

Again the little family went on another adventure, this time to the far north, to ice floes and sleigh dogs , winter darkness and the midnight sun. They lived there for six years until returning to their own country, bringing with them a mine of memories – of great experiences.

As it was, Marianne had been a teacher working with many aspiring children big and small, for many years. They wanted to learn so much and she wanted to teach them how to write good stories

And so she found the courage, as something had to be done to inspire the young aspirants to write well and plenty. So she did! From fantasies extensive coasts came “The forgotten island”, which children all over the country enjoyed to explore. And there was written many a good story.

But while Marianne relived the dreams and longing for the beautiful land in the north in her thoughts, she had but one thing to do – write about it! It amounted to eight short books about life in a small town under the northern lights. Many children read the books and Marianne was ecstatic! The greatest joy being, when she heard that the children living in the same small town had also read the books.

Bjarke and Rune were now grown up, they too had been given a gift when they were born. Their gift came from their grandfather Børge, not only to be able to write but musical too.

The two boys sang and played their way through their childhood and youth. Then Bjarke and his best friend, Frederik, wrote and composed an exciting musical Viking saga , which they travelled around the country with. One day they asked Marianne if she could not turn their saga into a book.

As soon as said , so done! Before long there was not just one but five books about the brave Viking, Hauge Styrbjørnsson.

Once again the little family were on the move! New adventures awaited them out in the great wide world.
This time by sea to the warm, southern countries. They travelled many a mile in the boat that they had been living in for some years. They met no end of lovely people and had lots of tremendous adventures on the way.

In one of the lockers Marianne had brought with her all the old stories from the foreign countries in the Far East .

Occasionally they were brought out and read and one hot November day (!) she sent them to a publisher in Denmark.
“Hmm,“ said the publisher, as he read them. “The story is – unfortunately – still very relevant such as the world is today. This we must print.”

And see, that is how the first story came into print – and for the time being the last! But – it is almost certain, there will be more!