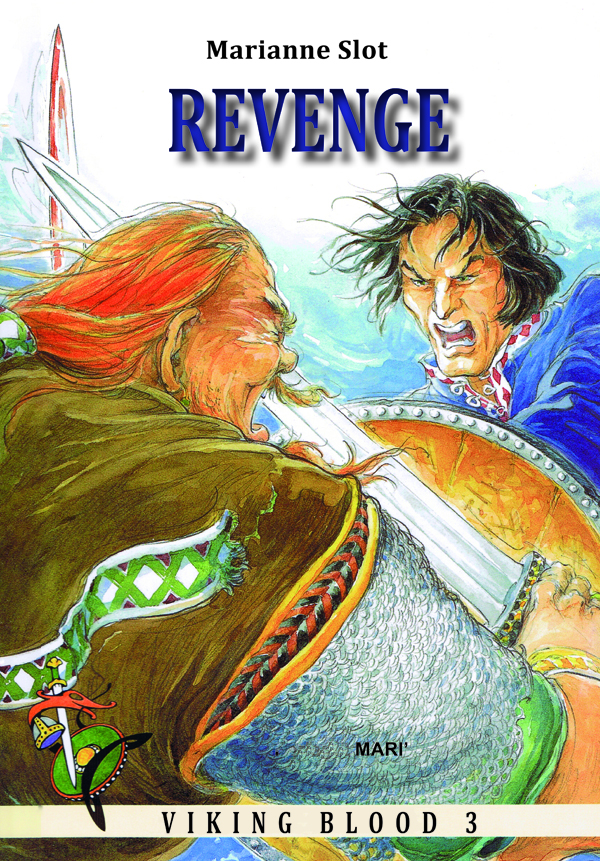 “Revenge” is the third book of five in the Viking Blood series by Marianne Slot.
Illustrated by Pia Falck Pape
Translated by Lisbeth L. Trampe

Hauge draws his bow and aim at the big moose. The cold air makes his breath come out like clouds. This beast may better not escape! At last they are going to have some proper meat. Even at the recent Yule sacrifice they’d had nothing to offer the Gods but a goat. Their winter supplies had run out much too soon. But then there hadn’t been a great deal of order at the slaughter this last fall, either.
Hauge aim at the animal’s shoulder holds his breath – and releases the arrow. But just then the scared animal jumps off, the arrow stuck in a hind leg.
…..
Four years have passed and Hauge’s mother Aasa has married Sven, hoping to help him become a better chieftain.
The dumb thrall girl, Astrid, gives birth in secrecy to a stillborn child. Hauge is shaken when he learns who the father of the child is.
The men travel to the winter markets in Skiringssal where many a good deal is done.
Once again Hauge meets his friend Hannibal. But on their way home they are brutally attacked and many die; among them, Sven.
Hauge is made chieftain and can finally avenge his father.

But who is the young beautiful girl, Edwina, who was enslaved on a raid in England?

“The book has the same mood and intensity of plot as the first two books. The description of the characters and the environment work well. The book gives an excellent and convincing picture of the Viking era. The text is easy to read, is written in an animated language with short sentences. It is printed in large, clear type with a well arranged layout, where the b/w drawings contribute to the mood and support the story well.
The book has an appealing, colour illustrated cover. Can be read from about 10 years.”
“… It is a very dramatic tale with rather a lot of mortality but the reader gets plenty of information about the era into the bargain.”

Tags for the Viking Blood – Revenge