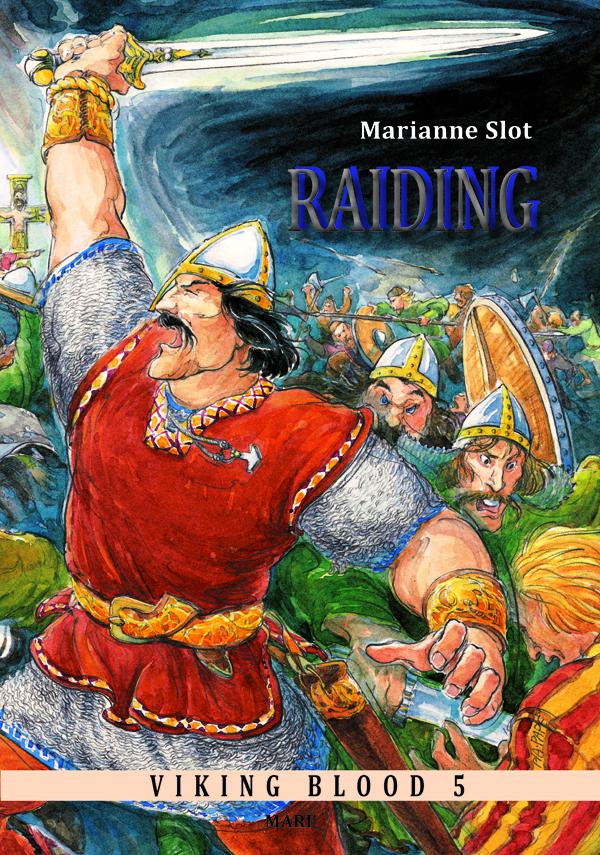 “Raiding” is the fifth book of five in the Viking Blood series by Marianne Slot.
Illustrated by Pia Falck Pape
Tranlated by Lisbeth L. Trampe

“Look, Olav is swimming!” Styrbjorn cheers, pointing.
Hauge and Torleif both look out at the water. Then Hauge starts. The boy is too far out; in the deep water. Just then a gurgling scream sounds from out there. Olav is splashing his arms wildly, and then disappears beneath the surface.
Hauge races out there, his heart hammering in his chest.
But where is the boy? Why didn’t they look at him? That boy is always bringing himself into trouble; a real daredevil. Always trying to climb the tallest tree, or climbing at the edge of the steepest slopes.
…..
Three and a half years have passed since young Styrbjorn, Edwina and Hauge’s son, was born and Edwina is pregnant again. The winters have been extremely hard and the harvests have been poor. Famine and hunger threatens.
In the autumn Edwina gives birth to twin girls. But everything goes wrong. The grain rots, only some of the ships return from the summer voyage; late, empty, and battered.
Then Hauge decides to go on a quest for food and riches in England.
A new ship is built for the voyage: Long and slender; fast and seaworthy.

In England they cause terror and devastation. Town after town is raided; left pillaged and plundered.
However, in the last town they have decided to raid, only one person is left, the priest in the church…

”This book, too, tells a very dramatic story, but the reader also learns a lot of the period.
Pia Falck Pape’s poweful illustrations compliment the story.
It is an excellent read for youngsters interested in the Viking Age.”

”The book lives up to its predecessors. It’s an easy read and well told Viking tale, that paints both a dramatic picture of the period, and tells of the harsh living conditions of the Aera, entirely in the power of nature.
An appealing cover and some lovely b/w sketches by Pia Falck Pape illustrates the story well.”

Tags for the Viking Blood – Raiding