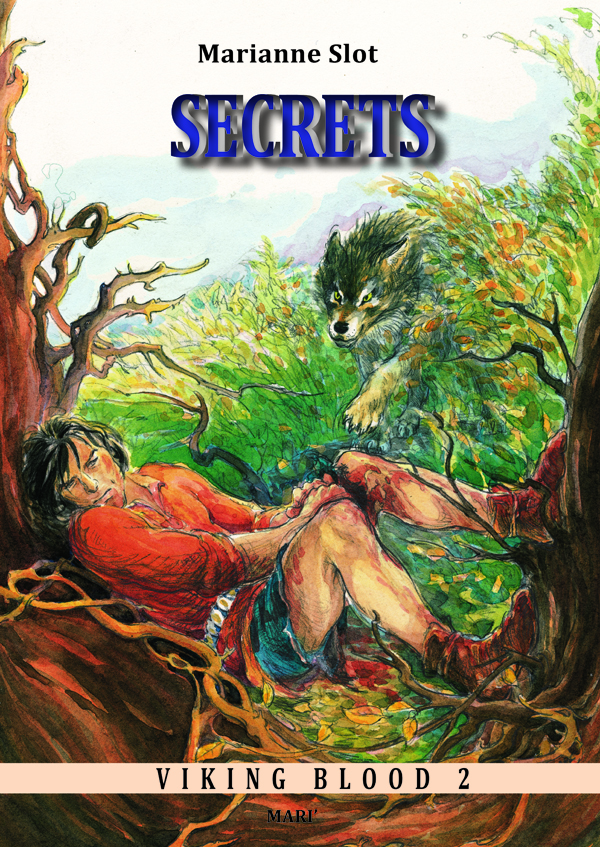 “Secrets” is the second book of five in the Viking Blood series by Marianne Slot.
Illustrated by Pia Falck Pape
Translated by Lisbeth L. Trampe

There, right in front of him it lies shining in the sand!
It is a large, nugget of amber, smoothed by sand and stones in the sea, and golden like the sun. In a few hours, the tide will once again cover the tiny beach, and take back the glowing treasure.
Hauge bends down, picking up the amber. He turns it slowly, watching it sparkle in the sunlight.
Certainly, this must be a gift from the Gods!
…..
Three years after the attack on Styrbjorn’s village his brother, Sven, has been elected their new chieftain and the village has been rebuilt.
After a successful summer voyage to Ireland the ships have returned and everybody enjoy the celebrations and heroic tales of the voyage.
Sven decides time for vengeance has come, and that the best surprise attack on Haakon’s town will be by going on horseback. Lauge Longsight and Hauge are allowed to come too.
Before setting off they practice archery and combat techniques. Suddenly the monks, Peter and Hannibal, return, and Hauge enjoys the company of his friend again.

However, the raid of vengeance does not go as planned…

“The description of the characters and the environment work well. The book gives an excellent and convincing picture of the Viking era. The text is easy to read, is written in an animated language with short sentences. It is printed in large, clear type with a well arranged layout, and the b/w drawings contribute to the mood and support the story well.

The book has an appealing, colour illustrated cover.
Can be read from the age of 9 years.”

“The story is still filled with drama and strong emotions, and beautifully illustrated with lots of expressive pen drawings by Pia Falck Pape.”

Tags for the Viking Blood – Secrets