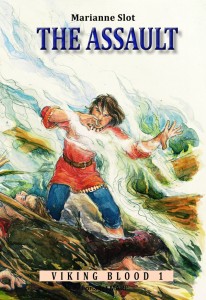 “The Assault” is the first book of five in the Viking Blood series by Marianne Slot.
Illustrated by Pia Falck Pape
Translated by Lisbeth L. Trampe

“Run, Hauge! Run!” Suddenly, all Hauge hears is his father’s voice, it drowns out the screams, the clashing of swords, and the roar of the fires from the torched houses. Haakon Gilmarsson and his men have attacked the village. For a split second, Hauge sees the fear in his father’s eyes and understands; this is not a request.
…..
Later the young Christian monk, Hannibal, tells Hauge that his father, Styrbjorn, has been killed in the bloody attack on their village. The conversation with Hannibal is the beginning of a lifelong friendship, and Hauge also wonders about the strange new God that Hannibal talks about.
When Hauge’s father is laid to rest, in the manner customary for a Viking Chieftain, the dumb thrall-girl Astrid is chosen to follow her master to Valhalla. Yet Hauge tries to prevent this when Astrid ”tells” him something. During Styrbjorn’s burial ceremony, Aasa, Hauge’s mother, promises her deceased husband that Hauge will avenge him when the time is right.
Hannibal and the older, stern monk, Peter, continue on their journey, but Hannibal promises Hauge that they will return.
After they have left Hauge finds an unexpected gift.

Reviews of Viking Blood 1 – The Assault

“We are in Norway in the time of the Vikings, where 13 year old Hauge witnesses the sacking and burning of his town.
The book gives a superbly convincing picture of the Viking era. Hauge is portrayed vivid and vital, in the story that is written in an animated language. The text is easy to read and written in short sentences. Printed in a large clear type with a good layout, where the b/w illustrations create the mood and support the story really well.
The book has an appealing,colour illustrated cover.
Can be read from the age of 9years.”

“The first book in the series of 5, is set in the Viking era, at the time when the first Christian monks came north.
The book has an appealing, colour illustrated cover.
Can be read from the age of 9years.
The story is filled with drama and strong emotions, and beautifully illustrated with lots of expressive pen drawings by Pia Falck Pape.”

Tags for the Viking Blood 1 – The Assault