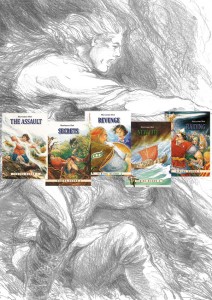 Big Save! Buy all five books of the Viking Blood series by Marianne Slot in one bundle.
Publishing House MARI’

Choose which format to purchase.

When downloading an E-book bundle you will receive your E-books in a zipped folder.

One fateful day the Viking boy Hauge survives a violent attack on his village, meets a young Christian monk, Hannibal, and a lifelong friendship begins.
In these five books Norse mythology, Viking feuds, trades, and voyages to Iceland, Shetland and Haithabu, is brought to life in an exciting story of life and death.
We follow Hauge as his life evolves around the vital consequences of that dramatic day; through vengeance and love; hardships of hunger and suffering, culminating in a final raid to England.

From the librarians reviews:

“The series give an excellent and convincing picture of the Viking era, at the time when the first Christian monks went north.The description of the characters and the environment work well. The text is easy to read, is written in an animated language with short sentences. It is printed in large, clear type with a well arranged layout, and the b/w drawings contribute to the mood and support the story excellently.
The books have appealing, colour illustrated covers.
Can be read from the age of 9.”
“The story is filled with drama and strong emotions, and beautifully illustrated with lots of expressive pen drawings by Pia Falck Pape.”

“Marianne, the first thing I have to say about your story is it is absolutely captivating! I just wanted to keep reading and keep reading to find out what happened next. I think your use of the very short chapters is very affective in keeping the pace steady and gave me little nuggets to chew on as I moved on to the next scene. Your imagery is vivid and lively and you did very well with the character development. Your story is well written. And I’ll tell you this, I consider it a great story when I can bond with the characters and get to know them well and when I can see the action played out in my head just by reading it.”

“The Assault” is the first book of five in the Viking Blood series.
It is the young Christian monk, Hannibal that tells the Viking boy Hauge that his father, Styrbjorn, has been killed in the bloody attack on their village. The conversation with Hannibal is the beginning of a lifelong friendship, which also makes Hauge wonder about the strange new God that Hannibal talks about.
When Hauge’s father is laid to rest, in the manner customary for a Viking Chieftain, the dumb slave-girl Astrid is chosen to follow her master to Valhalla. Yet Hauge tries to prevent this when Astrid ”tells” him something. During Styrbjorn’s burial ceremony, Aasa, Hauge’s mother, promises her deceased husband that Hauge will avenge him when the time is right.
Hannibal and the older, stern monk, Peter, continue on their journey, but Hannibal promises Hauge that they will return.
When they have left Hauge finds an unexpected gift.

“Secrets” is the second book in the series “Viking Blood”.
Three years after the attack on Styrbjorn’s village his brother, Sven, has been elected chieftain and the village rebuilt. After a successful summer voyage to Ireland everybody celebrates. Sven decides time for vengeance has come; a surprise attack on Haakon’s village will be on horseback. However, the raid does not go as planned …

“Revenge” is the third book in the “Viking Blood” series. A story of vengeance, friendships, and love.
Four years have passed and Hauge’s mother Aasa has married Sven. The men travel to the winter market, where many a good deal is done. Once again Hauge meets his Christian friend Hannibal. But they are brutally attacked and many die. Hauge is made chieftain and can finally avenge his father.

“New Life” is the fourth book in the “Viking Blood” series.
The winter after the avenging raid Hannibal and Edwina are still in Hauge’s village. As the last of the snow has smelted Hauge tells his mother Aasa that he wants to marry Edwina, although she is a Christian. The wedding is held as Norse custom demands with sacrifices to the Gods. One man tries to sabotage the party. A story of voyages, gales and losses.

“Raiding” is the fifth and final book in the “Viking Blood” series.
Three and a half years have passed since young Styrbjorn, Edwina and Hauge’s son, was born. The winters have been extremely hard. Famine and hunger threatens. Everything goes wrong. The grain rots, only some return from the summer voyage; late, empty, and battered. Hauge decides to go on a quest for food and riches in England. A new ship is built. In England they raid and pillage until …